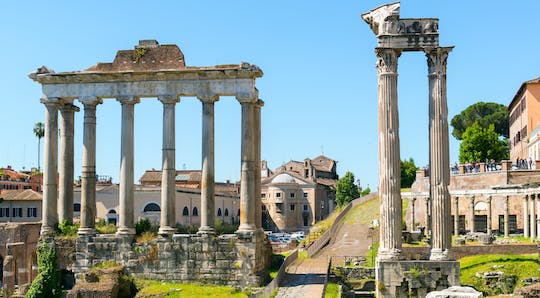 Tour the Roman Forum at your own pace

Listen to engaging stories directly from your smartphone

Explore the valley of the Roman Forum and feel the power of Ancient Rome coming alive around you with an engaging audio tour on your smartphone!

From the ruins of the Basilica Aemilia to the Temple of Vesta, the site is full of memories from the Eternal City’s past. Walk along Via Sacra, the spine of the ancient city, and follow in the steps of celebrated Roman warriors. Picture them in full armor, as they returned victorious from their battles and conquests to march the route of the Roman Triumph.

Among many other fascinating attractions, you’ll also encounter the famed Temple of Caesar. Leave a flower on the grave of the glorious general and learn about the games of power and control in Roman political life.

Self-guided audio tour for your smartphone (Android & iOS) in English

Entrance tickets to the Roman Forum

Hotel pick up and drop-off

The self-guided audio tour is designed to begin at the main entrance of the Roman Forum.

Book here for a small group tour of the Vatican Museums, St. Peter's Basilica and the Sistine Chapel. Take advantage of a local guide and skip-the-line entrance.

Skip-the-line entrance to the Vatican Museums and Sistine Chapel

Benefit from skip-the-line access to admire the beautiful Vatican Museums and visit the greatest attractions in Rome, the Sistine Chapel.

free cancellation
Duration up to 3 hours
Instant Confirmation
(673)
from:
£30.00