Things to do in Corfu 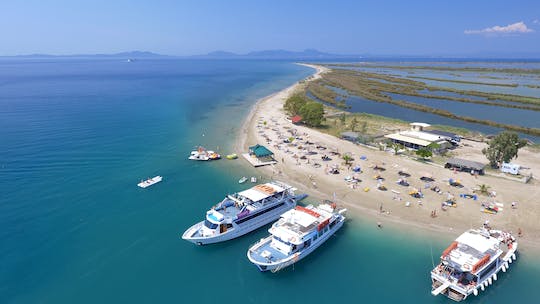 The azure waters and secluded coves of eastern Corfu are ideal for a day at sea. And once you step aboard Theo's boat, you'll be able to forget all your worries as we sail past coves, bays, soaring cliffs and beaches. Jump into the sea for a swim, relax on deck and enjoy a day out with all the family. We'll sail towards Kalamas beach on the west coast of the mainland. Come lunchtime, the crew will rustle up a barbecue on the beach served with free-flowing wine and soft drinks. And if that's not enough, there's also be fun and games for the kids so that you can put your feet up. 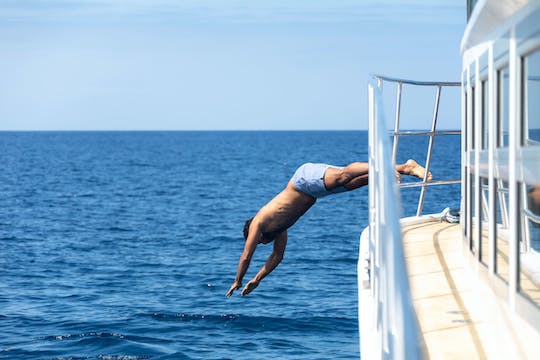 A half day at sea to blow the cobwebs away. The catamaran is kitted out with all your relaxation essentials – sunbathing decks, large floor cushions and a crew to take care of you while you're on board. You'll sail north or south around Corfu, taking in a cinematic display of coastal scenes with hidden sandy coves taking the starring role. You'll have around four hours out at sea, during which soft drinks and ice-cold beer will be available to quench your thirst while topping up your tan. What's more, your captain will drop anchor at the prettiest spot for some snorkelling, swimming and the chance to cool off.

free cancellation
Duration from 2 hours to 4 hours
Instant Confirmation
(3)
from:
£51.00 This exclusive-to-TUI tour offers up a delightful foray to the west coast of mainland Greece. And between taking in the scenery of pine-clad islands, you'll cruise into Papanikolis sea cave where you'll see the sea glittering on the roof. The next stop will be for swimming in the Blue Lagoon, known for its turquoise waters, where you'll also be served a barbecue lunch on board with free-flowing wine. You'll eventually dock at the fishing village of Sivota to check out the cafes and shops during some free time. Corfu is bursting with idyllic villages, monuments and scenic countryside. On this private tour, you'll head into the rolling hills and along its rugged coastline to discover sights such as the Mon Repos Palace, the famous area of Paleokastritsa and many other natural delights. Visit Mon Repos Palace, built for British High Commissioner, Frederick Adam. You'll also have time to discover the seaside village of Paleokastritsa, visit the monastery or explore the bay beneath, where an infinite sea of azure waters enhances the experience.And there's also a visit to a family-owned kumquat distillery to look forward to. Here, you can learn everything there is to know about this local fruit and the tasty products made with it. 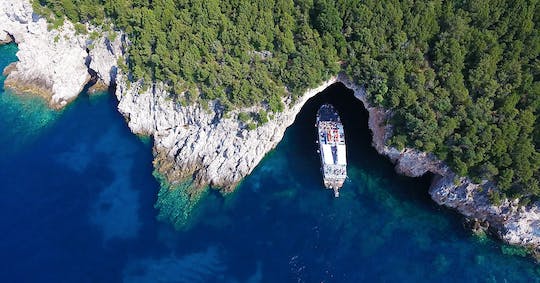 Parga and Sivota cruise from Corfu

Explore the areas of Parga and Sivota in a wonderful and relaxing way on a full-day cruise from Corfu!

free cancellation
Duration up to 10 hours
Available in: Make an afternoon out in Corfu Town a memorable one. This excursion includes a guided walking tour through Corfu town and is followed by a boat trip in the waters off the capital. You'll also enjoy dinner in a nice restaurant. You'll kick things off by making your way down the narrow cobbled streets of the capital, passing the ramparts of the old castle as you go – with your knowledgeable guide giving you plenty of insight into some quirky points of interest. Then, it's time to drop into a taverna for a traditional Greek dinner. The evening ends in style, with a sundowner harbour cruise. 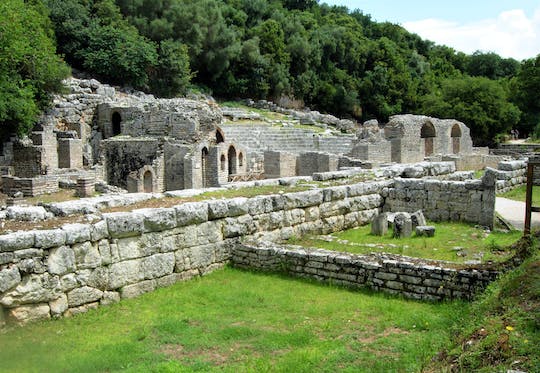 Albania is just a short boat ride from Corfu. This tour kicks off with a visit to the UNESCO World Heritage Site of Butrint. Everyone from the Greeks to Romans to Ottomans left their mark on this ancient town. Walking through its ruins is like leafing through the pages of a living history book. A woodland stroll up to the Venetian hill fort will give you great views over the national park and the surrounding wetlands. Afterwards, you'll head for lunch in the hamlet of Karanxh. Finally there's an hour of free time to explore Saranda before returning to Corfu. When it comes to relaxing cruises, this one is in a league of its own. You'll enjoy a new perspective of Corfu from the moment you're out in open sea. From the moment you board the catamaran, you'll feel the difference with a welcome drink setting the mood. You'll be able to relax in ample space as you to take in Corfu's beautiful coastline while your skipper sails towards the sunset. A tasty snack of local produce and drinks will be served while music adds to the sense of relaxation. And if you fancy a bit of action, equipment for snorkelling is provided – so all you need to bring is your bathing gear. 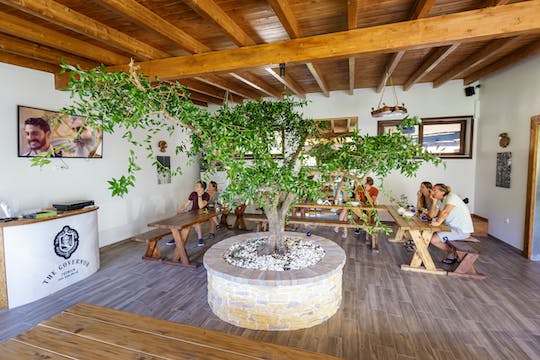 Ask any Greek what the secret to long life is and they'll say a good glug of olive oil over every meal. Find out why locals love their ‘liquid gold' with a private tour and tasting session at a family-run olive mill. You'll learn all about the history of harvesting olives and try top-quality oils paired with local snacks.Travel into the sun-soaked hills of Corfu's countryside where this centuries-old estate sits in the shadow of Gardiki Castle, a Medieval fortress. It's in this enviable setting that you'll be welcomed to one of Corfu's top olive oil producers, aptly named The Governor's Mill. Here, a member of the Dafnis family will show you around.Get the lowdown on the traditions of olive oil production processes as you stroll through groves with views of the mountains in the background. Then, it's time to savour the fruits of their labour. Sample their finest oils with a finger-food selection of local snacks and a good glass of Greek wine. 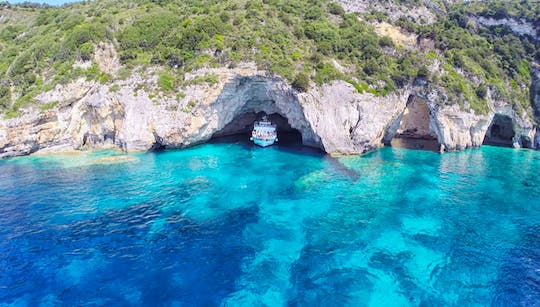 Discover the picturesque islands of Paxos and Antipaxos and stop at Lakka on a full-day cruise experience!

free cancellation
Duration up to 7 hours
Available in: 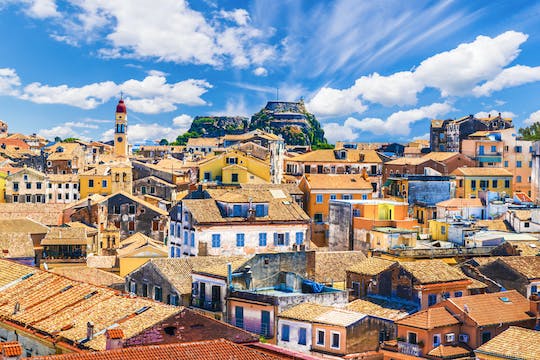 free cancellation
Duration up to 4 hours 30 minutes
Available in: 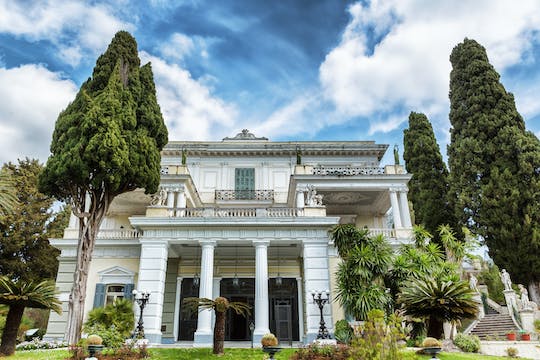 Corfu in a day: Achillion Palace, Paleokastritsa and Old Town

Kickstart this full-day private tour of the enchanting island of Corfu and explore everything in a day!

Things to do in Corfu

The ancients knew a good thing when they saw one. And Corfu, the setting of so many classical legends, hasn’t looked back since. Haloed by beautiful beaches and with a spine of hills dotted with remote villages, it’s a work of art. The island’s capital also happens to boast Greece’s most untypical UNESCO listing and former palaces of Austrian, German and Greek royalty. What’s more, Corfu’s location means that day trips to the mainland, Albania and the islands of Paxos and Antipaxos are just short hops away. Top six things to do in Corfu 1. Visit the Achilleion Palace As one of Corfu’s most popular attractions, the Achilleion Palace is best visited as part of a skip-the-line tour. This elegant retreat was built by tragic Empress Sisi of Austria and later bought by Germany’s last Kaiser. Climbing up the elaborately decorated main staircase is like stepping back in time to the Belle Époque. While the statue-studded terraced gardens offer views of Corfu city, the Ionian Sea and mainland Greece. 2. Cosmopolitan Corfu Town The island’s capital is a melting pot of cultures, as can be seen in its impressive architecture. Ruled by Venice for centuries before coming under French and then British control, it wears its cosmopolitanism on its sleeve. This eclecticism has earned it the status of UNESCO World Heritage Site – all other UNESCO sites in Greece are either classical or religious. The two Venetian fortresses are must-sees as are the French-era Liston and the British-built Palace of St Michael and St George. And just outside the Old Town is the Mon Repos Estate, birthplace of the late Duke of Edinburgh. 3. Head to Paleokastritsa Northern Corfu is all hills and rustic villages with a coastline that’s a medley of long sandy beaches, secluded coves and steep cliffs. But even among all these natural attractions, there’s one spot that stands out from the crowd. Paleokastritsa is a little gem. It’s built around three coves sheltered by tree-studded headlands. The star turn is the hilltop monastery, where flowery pergolas and arched passageways vie for your attention with Orthodox icons and eye-popping coastal views. It’s easy to see why medieval monks found it heavenly. 4. Hop on the boat to Butrint Just a short ferry trip away from Corfu is Albania, one of Europe’s most enigmatic countries. It makes for a fascinating day trip but best of all, you come across one of its top attractions almost the moment you land. UNESCO-listed Butrint boasts archaeological remains from the Greek, Roman, Byzantine and Venetian eras. Tours from Corfu bring you to the site and usually include stops in nearby villages. 5. Go on an excursion to Paxos and Antipaxos The islands of Paxos and Antipaxos to the south of Corfu are the embodiment of laidback Greek island life. Paxos, the larger of the two, is all secluded coves and waterfronts of pastel-coloured buildings. Sipping on a drink watching the boats glide in at a harbourside taverna in Gaios, the largest village, is one of life’s little pleasures. While tiny Antipaxos has about 20 full time residents and offers some of the prettiest beaches in the Ionian Sea. Tranquillity down to a T. 6. Ionian idyll The sheltered harbour village of Sivota on the Greek mainland is bathed by some of the clearest waters in the Ionian. Four tree-clad uninhabited islands lie just off Sivota, each hosting some of the best beaches around. Many boat trips take in the most enticing of these, such as Bella Vraka – which can be waded to from Sivota as the water is so shallow – and the jewel in the crown, Blue Lagoon beach. Secluded and backed by a dense forest, it can only be reached by boat.
Read more