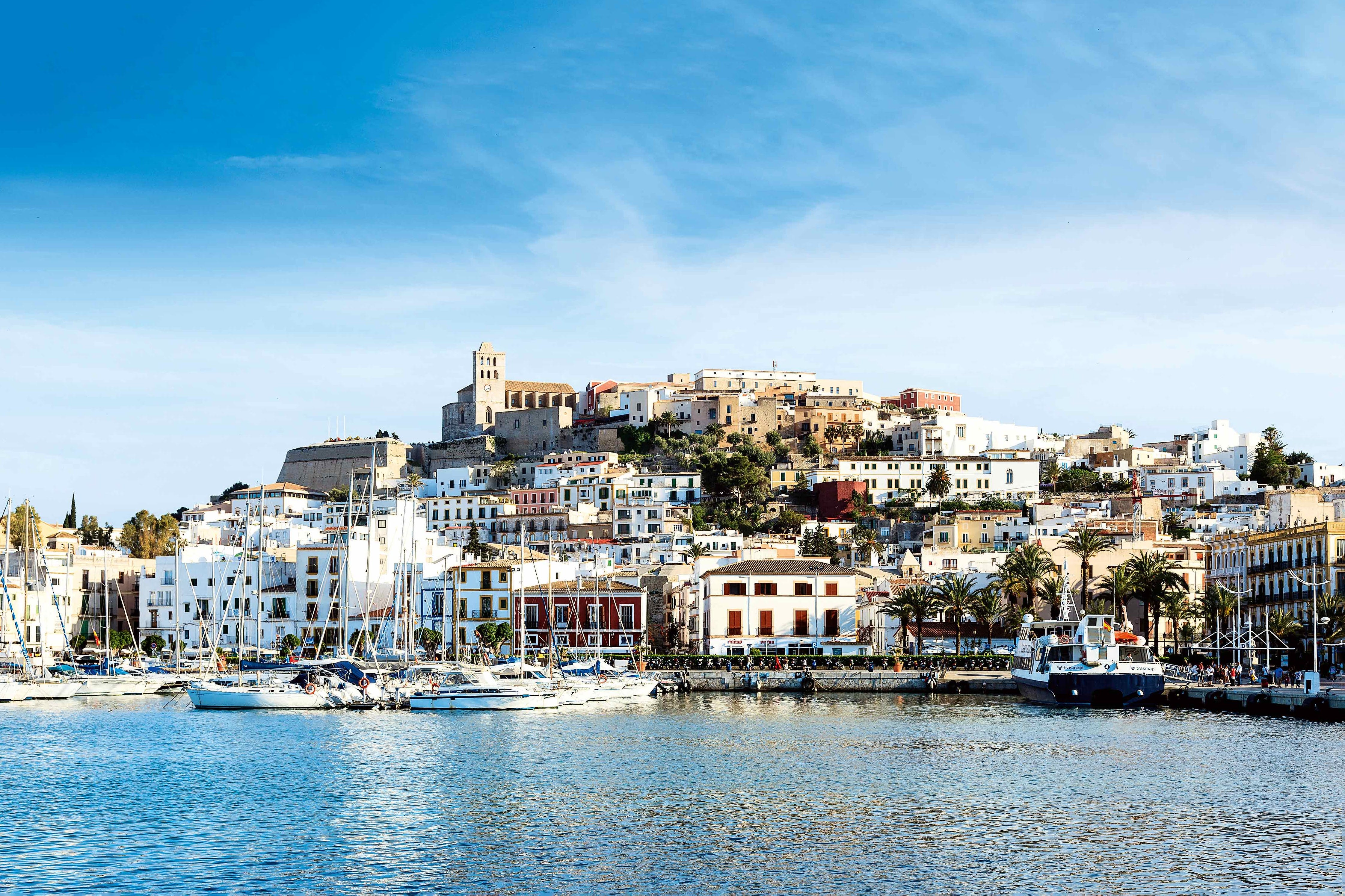 Things to do in Ibiza

Sail past San Antonio's famous ‘Sunset Strip' with a relaxing evening boat cruise along Ibiza's spectacular western coast. Step aboard early evening and enjoy the chilled-out vibe as you drift by sandy coves, bars and waterfront restaurants. Then, raise a toast to another great day on holiday as you sit back and watch the sun sink into the Med. 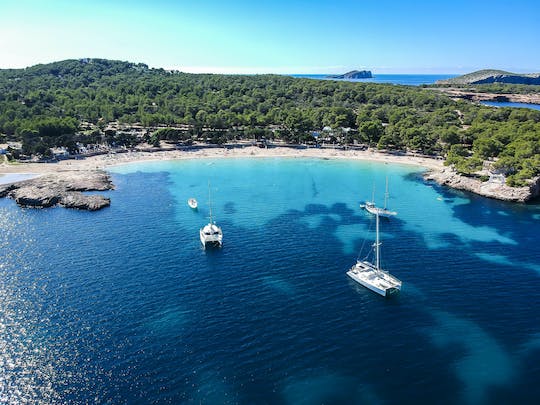 Sit back and soak up the scenery as you sunbathe on deck during this exclusive boat trip in Ibiza. Complete with chilled-out tunes, sunbathing space and snorkelling, it's a day that strikes the perfect balance between fun-filled moments and relaxation. 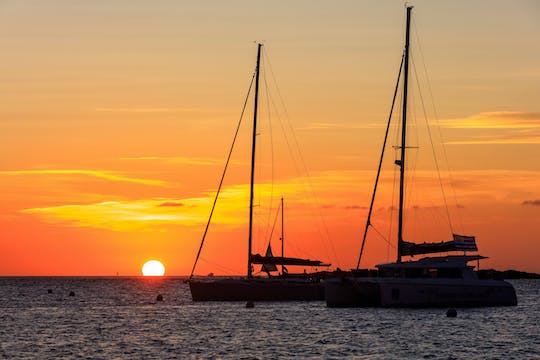 Sunset, music, barbecues and the sound of the sea – this afternoon catamaran cruise promises the chilled-out Ibiza vibe but in the middle of the Med. You'll sail out towards s'Espalmador then kick off your flip flops for dinner, drinks, DJ music and sunset skies above.Leaving the sun soaked shores of Ibiza behind, you'll skim the surface of the bright blue Med as you set sail towards the virgin island of s'Espalmador – an uninhabited island floating on iridescent waters between Ibiza and Formentera. You'll moor up so that you can step off and explore its made-for-selfies white sandy beach, and freshen up as your crew gets dinner underway.Back on board, and you'll get to tuck into a fresh barbecue of meat, fish, salads and fresh fruit as we sail the seas. There's plenty of photo opportunities along the way – think fluorescent blue seas and inlets as the backdrop – and the chance to take one last dip before sailing back through the sunset. DJ music completes the scene. 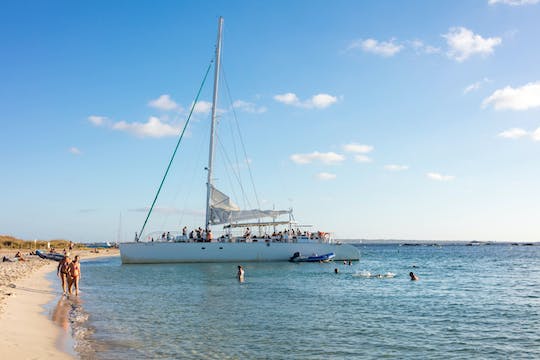 This is a day dedicated to pure relaxation. You'll drift over the Mediterranean in a catamaran, scooting over to s'Espalmador and by Formentera for some much-deserved sunbathing and swimming. There's a barbecue lunch on board, too, so everything's taken care of.Leaving the sun-soaked shores of Ibiza behind, you'll skim the surface of the bright blue Med as you sail towards the unspoiled islet of s'Espalmador. You'll moor up so that you can step off and explore its powder-white beach or cool down with a swim in its world-famous waters as your crew gets lunch underway.Back on board, and you'll get to tuck into a fresh barbecue with the sun beating down as you glide past the coastline of Formentera, Ibiza's sister island. With turquoise seas and rocky inlets as a backdrop, there are plenty of photo opportunities and the chance to take one last dip before the return leg. 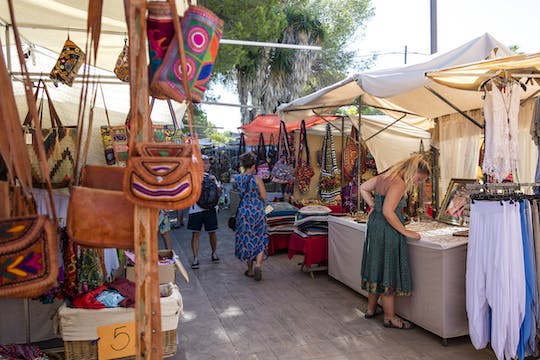 The Es Cana Hippy Market is the stuff of legend. Swing back to the Sixties at this treasure trove of cubby-hole stalls, where your batik fantasies clash in a cloud of incense. Ibiza's number one and original hippy market, it has refused to move with the times. The stands are piled high with authentic and retro items, everything from kaleidoscope kaftans to beads and bangles.This vibrant market is full of exuberantly creative artisans and artistes from all over the world, not just selling their wares but performing a wide variety of music, everything from local to foreign bands all playing in their own style.If you fancy just sitting back to soak up the atmosphere, there's food and drink for all tastes in the gastronomic areas. There are even activities for the kids and a playground for your little ones. Even if you're eyeing not buying, the psychedelic time travel is worth the visit alone. Discover Ibiza in a unique way: find clues and complete the puzzle in an escape app-guided tour! 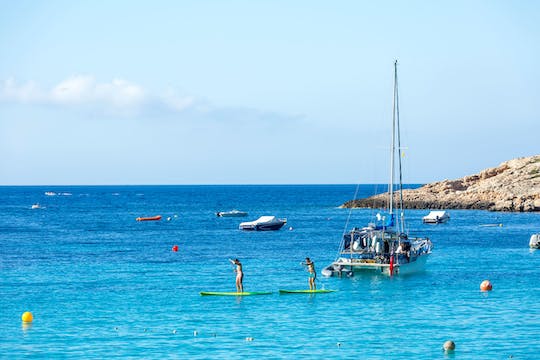 This tailor-made tour takes you to parts of the White Island that most tourists never get to see. In a private experience for you and your party, you'll spend a morning exploring select spots in the Ibizan countryside and the island capital. Learn about local traditions, taste typical foods, visit footprint-free beaches and discover the Dalt Villa. 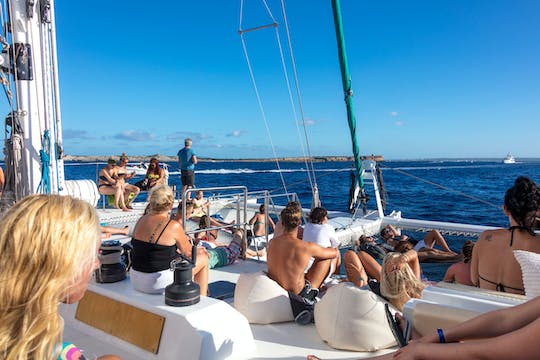 This is a day dedicated to pure relaxation in arguably the most exotic waters in the Mediterranean. You'll drift over from Ibiza in a catamaran, scooting by the islands of Formentera and s'Espalmador for some well-deserved sunbathing and swimming. There's a barbecue lunch on board, too, so everything's taken care of. Antoni, one of our expert local guides, says, ‘I'm from the Balearics, and even for me, s'Espalmador is a dream. A virgin islet surrounded by clean waters and untouched by civilisation.'Leaving the sun-kissed shores of Ibiza behind, you'll skim the surface of the azure Med as you sail towards s'Espalmador. You'll moor up so that you can step off the catamaran and explore the isle's Insta-perfect powder-white beach or cool down with a swim as your crew gets lunch underway. This uninhabited island is surrounded by a string of smaller islets, and the channel separating it from Formentera is so shallow that you can wade over.Back on board, you'll get to tuck into a barbecue, accompanied by salad and fresh fruit, all made from locally sourced ingredients. Then, hop on over to Formentera, Ibiza's tropical little sister, for another swim. This exclusive island has managed to stay under the radar despite being ringed by enticing fluorescent seas and rocky inlets. To protect the submarine eco-system, especially the fragile underwater posidonia meadows, the boat doesn't anchor, and no plastics are used on board. 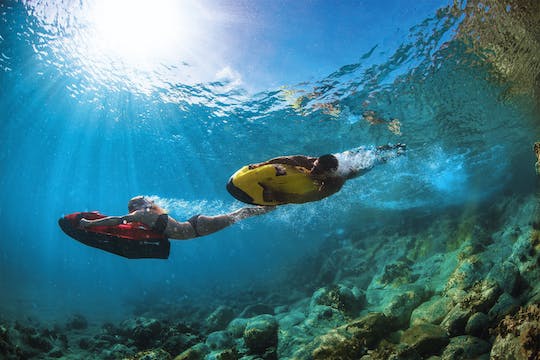 Whether you want to power over the waves on a jet-powered aqua scooter, feel the freedom of kayaking across the Med or simply soak up the scenery as you sunbathe on deck, this exclusive boat trip has you covered. It's a day that strikes the perfect balance between fun-filled moments and relaxation.Set sail from San Antonio harbour, and you can admire every inch of Ibiza's beauty as we leave the shore behind. Cruising by sun-drenched scenery, celebrity homes and a cluster of the island's most beautiful beaches, your captain will drop anchor in the perfect spot for some aquatic activities.You can swim and snorkel, speed around on a jet-powered aqua scooter or dive deep underwater with some seabobbing. There's also a floating platform to jump in from, plus paddleboards and kayaks, too. And when you're not busy having fun, you can simply sit back and soak up some sun in one of the boats spacious sunbathing areas. 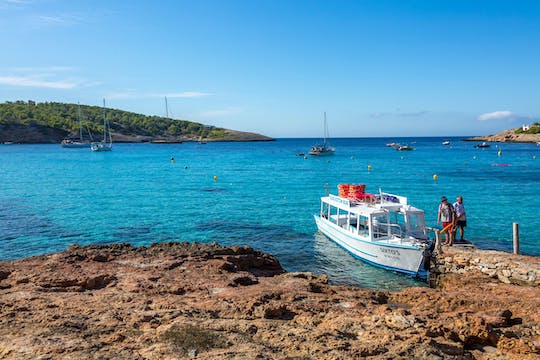 This tailor-made tour takes you to parts of the White Island that most tourists never get to see. In a private experience for you and your party, you'll spend the day exploring select spots in the Ibizan countryside and the island capital. Learn about local traditions, taste typical foods, visit footprint-free beaches and discover the Dalt Villa. 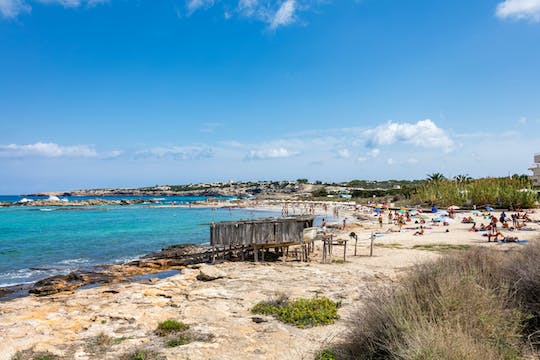 Blemish-free beaches, sleepy harbour towns, and a go-slow pace as standard – Formentera may only be a stone's throw from Ibiza, but it's a million miles away in personality. Sail over to the smallest of the inhabited Balearic Islands to swim in see-through waters, sample local food and see all the top sights of this easy-on-the-eye isle. What's more, a beach club lunch is included. Book your Santa Eulalia meet the sea life half-day family boat trip for a 4-hour adventure with content designed by a marine biologist in an incredible Ibiza setting. Perfect for all ages with activities ranging from snorkeling to a treasure hunt and underwater drone.

Things to do in Ibiza

It might be famous for its vibrant nightlife and party atmosphere, but this Balearic Island is so much more than that. Away from the nightlife hotspot of San Antonio, you’ll find world-class beaches, historic monuments, hippy markets and a UNESCO-protected old town. Sleepy whitewashed villages in the quiet and rural interior earned Ibiza its nickname of the ‘White Isle’. While nothing will beat the magic of seeing one of Ibiza’s sunsets from one of its award-winning beaches or from the deck of a catamaran cruise. Top six things to do in Ibiza 1. Ibizan sunset cruise Ibiza sunsets are the stuff of legend and what better way to watch the sky drop below the horizon than on a boat. Admire the sky as it becomes awash with rich colours of oranges, reds, pinks and purples as you sip on a cocktail. From a laidback catamaran cruise to a full-on party vibe, you’ll find several sunset boat trips on offer. As the sun sets in the west, the majority of cruises go along Ibiza’s western coastline, but there are plenty of great cruises sailing from the north, too. 2. Browse for trinkets at the hippy markets The famous hippy markets are one of the island’s top attractions. Strongly rooted in the Ibizan artistic movement from the 60s, they are scattered all over the island. These markets offer so much more than souvenirs, with bargains to be had on artisan products, colourful clothes, handmade accessories, pottery, leather items and more. Punta Arabi, held on Wednesdays, is one of the longest running markets and has about 500 stalls. While Las Dalias, held on Saturdays and Sundays, is probably the best known and on top of the usual offering, you’ll also find street performers, live music, food and drink. 3. Sail over to Formentera It’s so exotic that Formentera could easily be in the Caribbean. Instead, it’s only half an hour by ferry from Ibiza town, and with no airport and just a few roads between its key points, this little island is all about the beach. A pure get-away-from-it-all escape, you’ll fall in love with the soft white sands bathed by azure crystalline waters. Located within the Natural Park of Ses Salines, Ses Illetes beach is the most famous. The calm, shallow waters are perfect for snorkelling or diving and are flanked by protected dune areas. Despite Formentera’s secluded charm, you’ll also find hotels, beach bars, restaurants and even the La Mola flea market on the island. 4. Explore the Cova de Can Marça Located in the north of Ibiza, in a sheltered bay overlooking the Port de Sant Miquel, Can Marça is an impressive cave that’s over 100,000 years old. It was historically used by smugglers to store contraband, which they hoisted up from the sea. You can still see marks on the walls that they used to indicate the entry and exit. Visitors to Can Marça can explore the complex system of stalagmites and stalactites on a guided 40-minute tour, which culminates in a light and music show. 5. Stroll around Dalt Vila The capital of the island takes in the walled old town – a UNESCO World Heritage Site – the shopping districts and the port and marinas. By day, it’s all about shopping, boating and sightseeing through the cobbled streets and alleys. By night, you can expect alfresco wining and dining, high-end bars and live entertainment. Highlights of Dalt Vila include the gateway of Portal de Ses Taules – the main entrance to the old town, and the 14th century cathedral which sits atop the old town and offers panoramic views over the city, the harbour and the coast. 6. Spend the day at the beach Ibiza boasts some of the most beautiful beaches in the world. From white sandy bays with lively beach bars to isolated unspoilt coves and hippy havens, there’s a beach for every mood. Platjes de Comte, three sandbanks separated by rocky outcrops, is one of the most popular in the south and is home to the famed Sunset Ashram bar. In the north, you’ll find Benirrás, known for its spectacular sunsets and hippy spirit. Ses Salines, located in a nature reserve and named after the salt lakes nearby, is another must-visit. The contrasting colours of the white sands, dunes and blue waters backed by a green pine forest is Ibiza down to T.
Read more